If you’re looking for insight into how women think, you might be tempted to ask some of your female buddies just what they look for in a man.  Or you might read some books written by female Ph.D’s or “relationship experts” who explain in great depth how the double X chromosome psyche works.  Seems logical enough- you want an answer, you go to the source.  And if you do this, and take their advice, you’ll be damning yourself loneliness, frustration and confusion

The reason is that what women SAY they want and what they actually are attracted to are TOTALLY DIFFERENT.  Most of them don’t even realize this.  For the few that do, social conventions dictate they want one thing (a nice,sensitive,  stable guy) when they secretly yearn for another (a guy who’s a challenge, who’s a little dangerous).

If you’ve bought into the deception, you’re probably making some fatal mistakes with women. You might be making the same mistakes over and over – hell, I know I did.  When I finally reached the limit of heart-ache, I began to observe how relationships developed in the REAL world (not the Lifetime Movie Network world), and I consulted with men who were REAL EXPERTS and who were getting the results i wanted.

TRYING TOO HARD
This is a biggie.  A guy will often try to impress a girl. He’ll  try to entertain her constantly.  Fill in all the conversational gaps.  Call, email and text all the time.  Re-affirm commonalities and tell her what a great couple they’d make.  Hit her with non-stop compliments.

All of this puts a tremendous amount of pressure on a girl and is guaranteed to drive her away. Think  about it – how do you feel in any situation where someone is trying to grease you up and hard sell you?  Put off?  Suspicious? Exactly.

Girls are attracted to men who pose a challenge. Guys that are confident and independent enough to stand on their own.  You MUST  let her feel as if she’s earning your interest.  An occasional compliment is fine – but you have to balance that with (playful) teasing to put her on the defensive a bit. You have nothing to prove. And don’t be too accessible, either.  Remember- a budding romance seldom dies of starvation, but is often killed by indigestion.

ADMITTING YOUR FEELINGS
You think, “maybe she just doesn’t understand how much I like her.  If she only knew what was in my heart, she wouldn’t have any doubts and could open her heart to me”.  So you tell her.  Now she won’t return your calls.
Gads!  I’ve actually done this!

One of the immutable laws of relationships is that the person who cares less has more power! That holds true at the start and it holds true 10 years down the line.  Of course you need to let her know that you’re into her, but she needs to feel the very real possibility that at any moment, you could walk away.  That feeling of uncertainty is a critical component in passion.  If you admit you care for her first, or care for her most, you ll tip the scales in her favor and she will cool on you.
The next time you feel the need to look her in the eyes and express your feelings… SHUT UP! Say less, and you won’t say the wrong thing!

MOVING TOO FAST
So you’ve been on a few dates and thing are going really well.  Maybe you’ve even taken her to bed.  That does NOT mean you are a couple.  Do NOT assume you can just drop by her place on Friday night and hang out.

Relationships take time to build.  You cant just slap together a few dates and think you’ve got something that’s solid. Be patient.  Be elusive.  Let her wonder where you stand. That means sometimes, you will have other plans (even if you don’t).  It means you return every other call and every third text.  If you chase, she will run.So  don’t chase.

If you’re continually getting ditched, or meeting girls who want to be ‘friends’ not lovers, and if you’re fed up, its time to make some changes. Humans are ruled by EMOTION, and they justify their actions with LOGIC. If you want success with women, you need to play to their psychology: pique their curiosity, be playful, position your value, use the scarcity principle, tease, be unpredictable, etc.

Don’t try so hard.  Play your cards close to your vest, and care less than she does. Say less.  Take your time, let her come to you.  Be a challenge.  TAKE SOME RISKS.  You’ll be glad you did.

What Makes YOU Special? – Cool Hobbies That Attract Girls

They do their job, come home and veg, maybe get aggravated at the    family, eat, sleep, shit and do it again the next day.  And the day after that.  In fact, this describes how most people sleepwalk through their lives.

It saddens me when I meet people who don’t have their own  personal “thing”.  Something they’re passionate about.  Something that they DO, that gives them a UNIQUE IDENTITY.  Something COOL.

It doesn’t have to be a colossal  mission like tearing down “the system” -as  Tyler Durden set out to accomplish in Fight Club.    It might be a way to blow off some steam, express your creativity, adds value to your life, or just  widens your social circle.  And of course, that makes you interesting to girls.

So what sets you apart from the millions of other finance guys, middle managers, IT troubleshooters,  small business owners etc? What makes you special? What’s YOUR thing?

If its  cooking up meth in your kitchen or organizing travel groups to Al Quada training camps in Pakistan, you’ll get blown up and be deleted from the dating pool shortly.  For everyone else, on with the show.

A note of caution: At the beginning of your learning curve, your new hobby will NOT be fun.  As a matter of fact, you’ll likely feel irritatingly frustrated.  Fun is a function of competence, and that takes time.  No one just walks into a brand new endeavor and masters it.  So be prepared to stick it out for at least 6 weeks (the length of an introduction class) to 6 months (the minimum amount of time to develop some aptitude).

As for me, I’ve selected:

I understand that there are only so many hours in a day, and that you’re tired after work, and you have responsibilities.  So does everyone else. Make the time and make it happen.  Or you can mill around with the rest of the zombies. 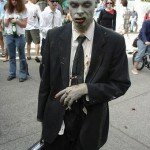